"La Valle is an accident, Ironton was a good town with iron mines. When the railroad came, the people owning the foundry in Ironton were afraid the trains would burn all the wood they needed. The foundry owners bought all the land around Ironton so the railroad was forced to run through La Valle ". Ben Paddock

Early, the town of LaValle was part of the township of Marston, which included the territories of what is Woodland, Washington and Ironton. Woodland and Washington towns were withdrawn and Ironton and LaValle remained as Marston town. During 1862, Marston ceased to exist and the area's name was changed to LaValle. The first election of town officers occurred on April 1,1862 in the village.

Together, Hamlin and Rushmore built a dam and framework of a mill. In 1850, machinery was installed and the pair put a saw mill into operation. In 1864, J.F. Sanford came into possession of the mill property and also established a flour barrel factory there. There was three runs of stones and grist mill was kept busy with custom work. The factory also made broom handles. Five years later, Mr. Sandford built a three-story grist and flour mill in connection with the barrel factory.

In 1874, the sawmill machinery was replaced by equipment for the manufacture of staves. In 1878, the stave factory was destroyed by fire and the operation was moved back into the old sawmill building. In 1878, the North Western Hoop Pole Company of Chicago put a steam in the eastern part of the village where hoop poles were made. A carding machine was set up in the upper part of the building.

Fire partially destroyed the mill. When rebuilt, it was used to grind and mix various kinds of stock feeds. The building, at that time under the ownership of Victor Duddleston, also housed a water-driven generator which produced electricity for the village. Originally the water wheel was shut down every evening at 11 p.m. Anyone using lights after this hour had to rely on kerosene lamps. The La Valle Milling Company produced the electricity for the community until May 25, 1970. At time it was taken over by the Oakdale Electric Cooperative. At that time, it was one of the smallest and few remaining privately owned utilities in the state. By 2000 the dam plug was pulled.

The first general store was built and owned by S. P. Barney in 1855. A special post office was established in the corner of the store in 1856. It was known as a special office with the mail being carried from Reedsburg by citizens who at first drew cuts to decide who would carry the mail for the next two weeks. When the Chicago and North Western Railroad arrived in 1872, mail was sent directly to and from LaValle. Another pioneer store was established in 1873 by Benjamin Paddock. In 1956 it became Charles Pearson store and today is a laundry mat.

The first schoolhouse was built in 1855. In 1875, it was replaced by a two room structure which was soon outgrown. In the early 1900s, a new site was chosen and a four room brick schoolhouse was constructed. In 1936, a gymnasium was attached. The current Ironton-LaValle school was built in 1966.

A Women's Literacy Club, organized in 1894 held various study activities and promoted village welfare. A library was established and for some time operated by the club, with each member taking her turn at being librarian.

In 1934, the village took advantage of the Works Projects Administration program and built a swimming pool. Extensive improvements followed in 1950, allowing the pool to meet sanitary regulations. The current pool was part of a community fund drive to build in the 1990's.

A bakery and grocery was operated in LaValle in 1926. The owner was William Schrorder. The bakery was equipped with a Superior Bakers Oven and had a daily output of 400 loaves. Schroefer transported many of his baked goods by car to Reedsburg, Loganville, Hillpoint, and Lime Ridge.

The first telephone was connected in 1891; it went from Paddock's store to the Paddock House on North Street. Gradually more people got telephones and by 1900 a central phone system was organized in a building. In 1910 the company became a cooperative.

The State Bank of LaValle was organized in 1902 by Herbert Paddock as president and Charles Pearson as vice president. The bank closed in 1932 and was later taken over by the State Bank of Cazenovia. Today it’s a branch of the Royal Bank.

During the latter half of the 20th Century, LaValle became the crossroads to the lakes with the construction of Lake Redstone and Dutch Hollow. The next century brought major changes to the village via fires and two 100 year floods in 2008 and 2018.

LaValle Businessman formed the "Commercial Club" in the 1920s. They sponsored the annual water festival which included ballgames, street dance, water fights between fire departments and a beauty contest. In the 1970s the name was changed to LaValle Business Men's Association. By the 1990s the name changed again to the LaValle Community Action Club. But the results of the group hasn't changed: improvements to the community. The group helped build a new swimming pool, improve the ball field, purchase new playground equipment, a welcome sign by 400 trail, new park buildings, community calendar sign by fire house, Easter and Christmas parties for kids. All thanks to successful celebrations events. LaValle began having an annual celebration about the same time the free shows started in 1923. It's always celebrated on the second weekend in August. It's a homecoming reunion for many families. 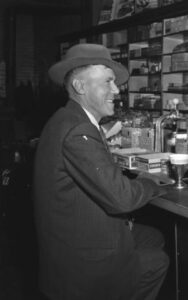 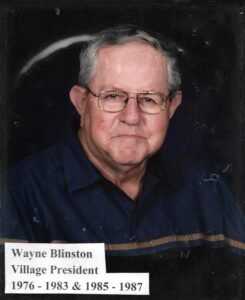 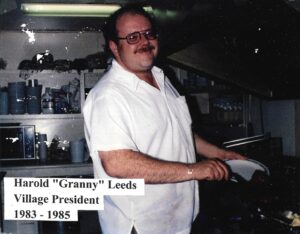 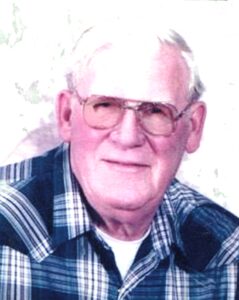 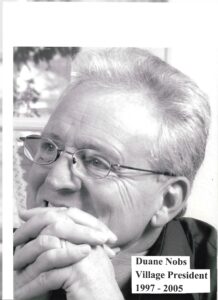 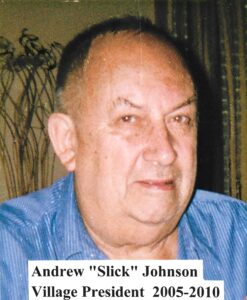 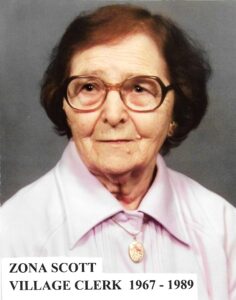 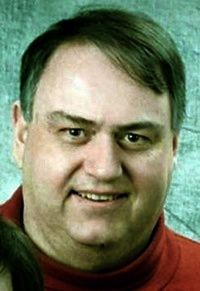 On June 1, 1939, the Reedsburg Free Press had the headline, “Rising Hollywood Screen Star Claims LaValle as his Birthplace.” The article read, “In the Sunday papers appeared a picture of a young man who was called “a new Hollywood actor,” and who said he was a native of LaValle, Sauk County, Wisconsin. The name John Laird made but little impression upon the LaValle community and many wondered just who this handsome John Laird could be who claimed to be a native of their village. H.A. Blank, the druggist, was the man who remembered the Lairds and recalled for the villagers just who the family was. According to Mr. Bank’s story, the Lairds, a Mr. and Mrs. Jim Laird, came to LaValle around about 1912, and lived in a house just back of the one Mr. Blank was living in at the time. Jim Laird was a short, small Irishman, with a fiery temper. He was a tinsmith by trade. Mrs. Laird was a tall, very beautiful woman. Mr. Laird’s father, a retired railroad worker, was a frequent visitor at LaValle. The Lairds had lived in LaValle but a short time when John was born. He was their first child, and as far as Mr. Blank knows, the only child. “Doc” Miller played stork at the event. When the baby was about four months old, the Lairds moved away, not to be heard of again, until the picture of John appeared in the screen section of a Sunday paper, along with the story of his rising success in films. John Laird had his first role in “Sorority House,” an RKO picture. He attended Lake Forest College and went into stock in the east. A talent scout saw him in a Broadway show, “Where Do We Go From Here,” and hired him for pictures.

Tomb of the Unknown Soldier Expand 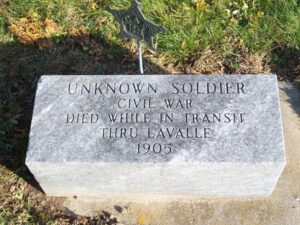 Located north of the village along Thompson Rd in Oak Lawn Cemetery.  There is a stone marker of a civil war veteran who died in LaValle in 1905. The grave lot was purchased by Sauk County. A stone marker was added to the site by Spellman- Whitney Monument Works in Reedsburg.

Located in the Oak Lawn Cemetery north of the village along Thompson Road.  The Iron Civil War cannon was dedicated by the local Grand Army of the Republic group.  The 5.82 inch caliber smoothbore M1844 24-pounder flank howitzer was essentially an iron copy of the M1841 24-pounder bronze field howitzer.  The barrel is 69 inches long.  Total production was 577; and were produced from 1846 to 1864.  The M1844 24-pounder flank howitzer cannon was made by Cyrus Alger & Company of Boston, Massachusetts, in 1849.  There are 10 known M1844 24-pounder howitzers on display today in Wisconsin.

In 1848 the first dam on the Baraboo River was built at this site. Power from it was used for grinding grain and sawing lumber. J.F. Sanford added the grist mill which ran three runs of grindstone, to his already existing flour-barrel manufacturing plant (1864) and sawmill (1869).

In 1874, the mill was taken on lease for 19 months by Teodore Yager. He later partnered with J.N. Nye. In 1878 Lyman Beery bought Nye's interest so Beery and Yager, manufacturers of flour and feed, produced LaValle Mills Choice Winter Flour to the tune of seventy barrels a day. The feed mill was first built on the site in 1896.

Charles Pearson installed turbine waterpower in 1905. Joseph Duddleston became the owner of the mill in 1911 and installed the first 110-volt electric system for the Village of LaValle. In 1912 it was operated mostly for wheat flour Milling. The merchants of the village showed free movies on the front of the building.

Originally the water wheel was shut down every evening at 11 p.m. Anyone using lights after this hour had to rely on kerosene lamps. The La Valle Milling Company produced the electricity for the community until May 25, 1970. At time it was taken over by the Oakdale Electric Cooperative. At that time, it was one of the smallest and few remaining privately owned utilities in the state.

Joseph died in 1934 and left the mill and power plant to his sons Victor and Bill Duddleston.

A second fire destroyed the structure in 1937 but was quickly rebuilt. The $25,000 fire was believed to have been initiated by a spark from the generator.

Volney and Edna Duddleston (Victor’s nephew) bought the dam and feed mill on March 1, 1965. The water turbine was continued used for grinding feed. Later owned by their daughter, Dianne and Daryl Hansen. It was sold to the Sand County Foundation. By 2000 the dam was removed, and the river once again flowed freely. Lastly it was purchased by Michael and Jody Cummings. They turned the old mill, with its massive, exposed beams into an antique emporium. Damaged from the 2018 flood made the site on FEMA buyout program. 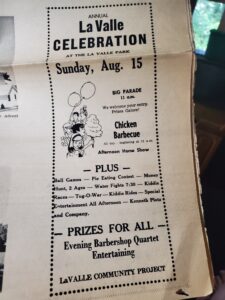 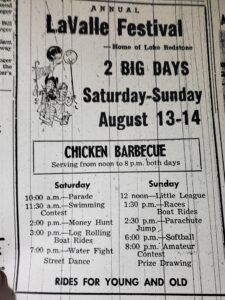 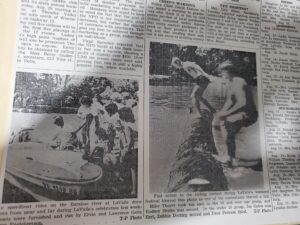 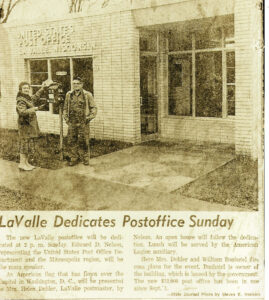 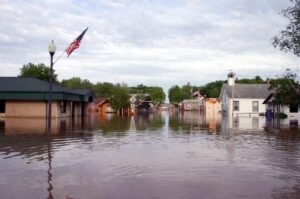 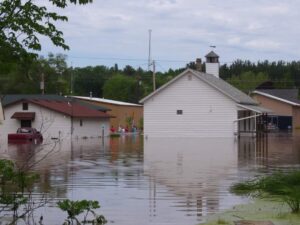 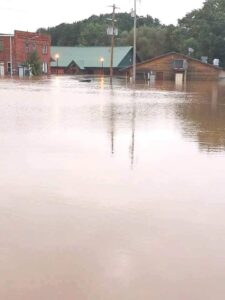 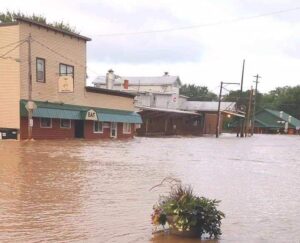 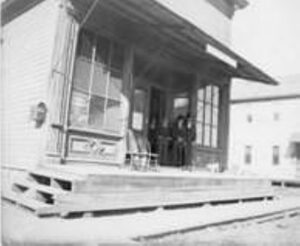 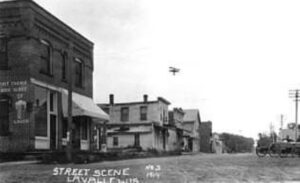 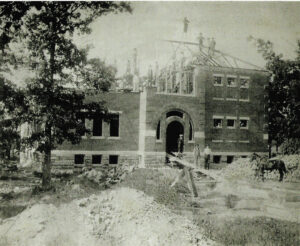 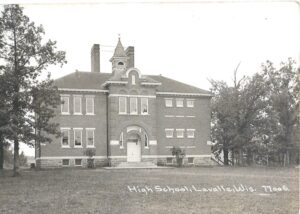 Many think that LaValle was named because of the French term the “valley” but the June 4, 1941 issue of the LaValle Weekly newspaper has a different story.  H.E. Blank’s local column talked about his interview with Peter LaValle whose father founded LaValle.  He stated that his father, Martin LaValle, was born in 1835 in Stevens Point.  He studied civil engineering and became a federal surveyor.  In order to maintain communication with the Surveying Department of the government, it was necessary to give a locality a name where he was working.  So he called it the LaValle Government Post.  Martin LaValle, founder, was an Irishman and not French and was a father of three sons.  His son, Peter, was only five when his father died and they were living near Missoula, Montana, at that time.  Victor lives in Idaho and Markus in Colorado.  None of the LaValle brothers had any offspring, so the family name LaValle was doomed with the passing of the three sons of the founder.